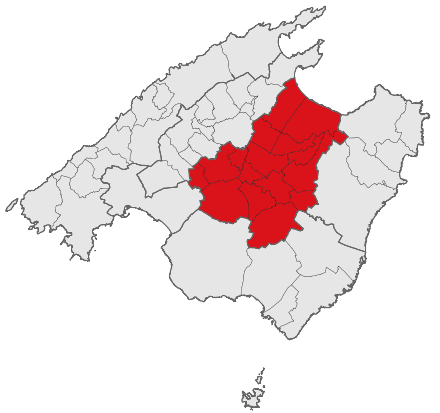 Pla de Mallorca or Es Pla is a region (Catalan: Comarca) on the Spanish Balearic island of Mallorca. It is located in the central part of the island. Es Pla is a plain between the mountain ranges of theSerra de Tramuntana in the northwest and the Serres de Llevant in the east, which is interrupted only by smaller mountain ranges. The highest point is the 540 meter high table mountain Puig de Randa at the border to the south bordering Migjorn.

Most of the agricultural products for the daily needs of the island, such as potatoes, rice, corn and vegetables, come from the Es Pla region. In addition, wine is grown and there are a large number of almond orchards. With its extensive fields, Es Pla is also known as the granary of Mallorca. Due to the protection of the mountains in the northwest from the winter north winds, up to four harvests a year are possible. However, the interior of the island is also the hottest area of the island in summer.

The Pla de Mallorca has the fewest inhabitants of the six comarques of Mallorca, with 54,147 people (as of 2008). There is also no central place of the region. Meanwhile, the most populous is the tourist resort of Can Picafort on the bay of Alcúdia in the municipality of Santa Margalida.At the bay in the north of Mallorca there are miles of sandy beaches, the main destination for most vacationers. Tourism is also becoming increasingly important in Es Pla compared to agriculture. In the interior of Mallorca is thereby increasingly on the Agrotourismus

set, vacation in the countryside in the shadow of the many windmills.

Adjacent island regions are in the east Llevant, in the south Migjorn, in the northwest Raiguer and in the west the island capital Palma.