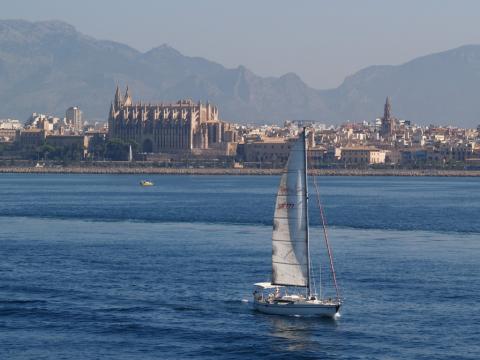 Palma de Mallorca, in the years 2008 to 2011 just called Palma, is the capital of the Spanish Mediterranean island of Mallorca and the seat of the autonomous government of the Balearic Islands.
Palma de Mallorca is the supply center of the Balearic Islands, where, in addition to the government, the largest port, the largest airport and most infrastructure facilities are located. In addition, the city is a tourist magnet, as excursions are offered here, especially from the hotels scattered around the island.
At the beginning of October 2008, the addition “de Mallorca” in the name of the city and municipality of Palma was deleted from the Spanish municipal register. This was the implementation of a request dating back to 1998. The new municipal government in Palma de Mallorca, which has been in power since summer 2011, reversed this by a city council resolution on November 16, 2011. The official city name since 16 November 2011 is again Palma de Mallorca.
Palma de Mallorca stretches along the Bay of Palma on the coast of the Mediterranean Sea in the west of the island. The agglomeration of the city is about 30 kilometers long and goes along the coast fromMagaluf in the west to S’Arenal in the east. It is home to about 500,000 inhabitants, more than half of Mallorca’s population.
To the northwest of the city lies the Serra de Tramuntana and to the northeast some smaller hill ranges that separate Palma de Mallorca from the central plain of Mallorca. To the east, the sandy beach Platja de Palma extends along the coast for about ten kilometers to S’Arenal. To the west lies the bay Cala Major.
Visit Website