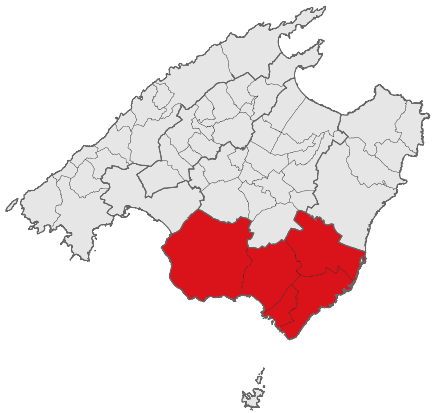 Migjorn is a landscape zone (Catalan: Comarca) on the Spanish Balearic island of Mallorca. It is basically the southern continuation of the Plà de Mallorca plain. Despite the rather flat character of the region, the southernmost landscape of Mallorca has an elevation above 500 meters above sea level. On the 509 meter high Puig Sant Salvador in the municipality of Felanitx is the Santuari de Sant Salvador monastery. The mountain is the highest elevation in the southern area of the Serres de Llevant.

With the town of Campos, Migjorn has a center of rather rural character. Agriculture still plays an important role here. A special feature are the caper bushes cultivated around the village. A contrast to this is the village of Colònia de Sant Jordi, the former port of Campos. Besides the six-kilometer-long beach of Es Trenc, a tourist center with more than 3000 tourist beds was built here. Ruins of buildings on the northern part of Es Trenc in the settlement of ses Covetes testify to the fight against illegal development. A court ordered the demolition of the half-finished houses built here next to the beach without permission.