The old town of Alcudia is one of the most beautiful and historic destinations of Mallorca and is located in the northwest of the island. In the old town of Alcudia are the Roman ruins of Pollentia with more than 2000 years old. If you like history or want to know more about the mallorcas culture then we offer you the best sights in Alcudia.

First we will talk a little bit about the history of Alcudia. There are signs that the Roman people were in Alcudia since 123 BC. Near the old town you can visit the ruins of Pollentia, where the remains of the houses, streets and amphitheater are preserved. After the Romans, the city was occupied by the Vandals and then by the Moors until the XIII century. In XIII century the city was conquered by King James I. The name of Alcudia comes from a Moorish term that was the way the city was first described. In the late eighteenth century was built the port of Alcudia. With this, the people of Alcudia wanted to improve the economy but that did not help much until tourism has arrived in the region of Alcudia since 1960.

The main attractions in Alcudia

Here we show you the Alcudia sights that are interesting for us to see.

The wall was built in XII. Century and the construction was not completed until the middle of the fourteenth century (1360). The wall has a quadrangular structure, reinforced with 26 towers along the perimeter of 1.5 km and an average height of 6 meters.Besides, part of the moat wall remains preserved distributed are formed. The historic center of Alcudia was declared Historic Artistic in 1974 along with the remains of the Roman city of
Pollentia declared.

One of the tourist attractions of the medieval wall are its doors. Originally there were three, the Porta des Moll or of Xara, the Porta de Mallorca or de Sant Sebastia and Porta Roja Vila. 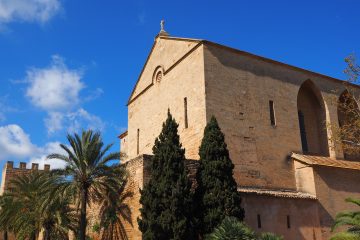 The church is on the same side where the wall is located. With a neo-Gothic style, the church was built in 1870. Near the church you can find the religious museum, where you will discover an interesting collection of religious art such as sculptures, paintings and stones from other eras. The church of Alcudia is an interesting sight to see. 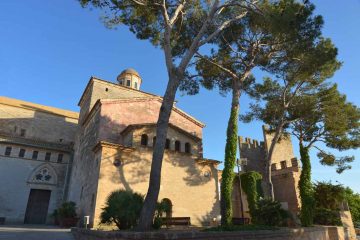 The chapel stands next to the churches and it was built at the end of the XVII century. In the chapel, one finds “el Santo Cristo” of Alcudia. You can see in the chapel, which is baroque style from inside the church.

Through the old town there are many examples of old houses. Through the history they have undergone important changes, but some houses have survived to this day as well as in the past. The most famous old houses are:

CAN TORRÓ. At present, it is used as a library. This house of XIV century consists of 3 floors and it is restored and it is one of the most modern libraries of the Balearic Island. Can Torró is located in Serra street.

CAN FONDO O CAN CASTELLS. On the second floor you can see three Renaissance-style windows with shields in each window. The central window bears the shield of the Castells family, who built the house.

The Roman ruins are located near the old city walls. The archaeological site consists of 12 hectares, where you can visit the different areas of the ruins: the residential area, La Portella, the wall (100 meters long) and the Roman theater. Info in: ciudad romana de Pollentia. 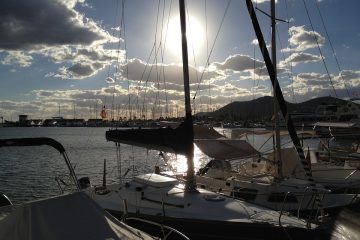 At the Haffen there is a Haffenpromenade, where you can find many restaurants and stores. It is a good place to walk and shop.

If you have not yet found your Finca im Norden of the island have booked look at our fincas and vacation homes in Alcudia.